I hope this page finds you well. I wanted to talk a little about myself and what I have done over the years...

After graduating HS, I went to SUNY Fredonia where I earned a BS in Elementary Education. After graduating, I wanted to get out of the cold so I moved to Phoenix, AZ to start my teaching career. After my first year, I was surprised by being named Sam's Club Teacher of the Year. I ended up teaching elementary and middle school for only four years and during that time, I also earned a M.Ed in Elementary Education with a focus on Educational Technology. From there, I moved on to a district role where I then trained teachers on how to use technology with their students. During the three years I was in that role, I began my PhD program in Educational Technology. I took a teaching role at Arizona State University where I taught undergraduate and graduate courses for seven years. I graduated with my PhD in December 2012. 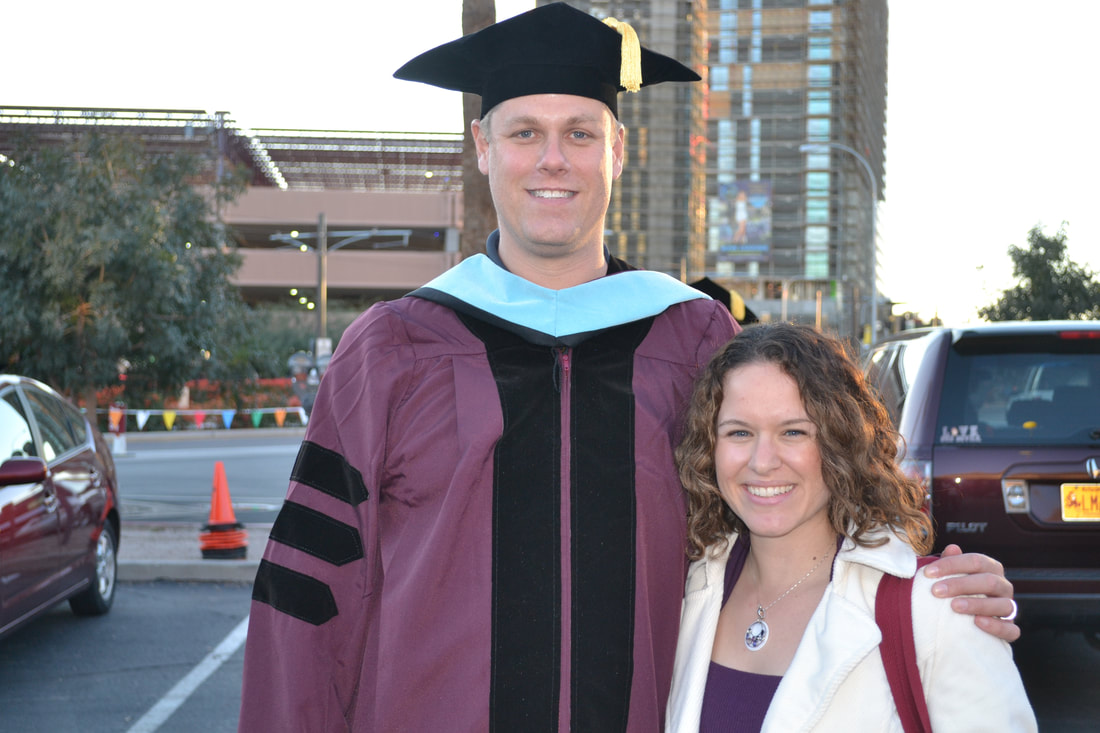 One of my college girlfriend's introduced me to Rotary Sunshine Camp while I was in college. This was a camp in Rush, NY and the camp served several different communities of kids but their main focus was a camp for kids with disabilities. I worked at this camp for six summers, starting as a camp counselor, then head counselor and eventually the coordinator of the new director program. This experience was the most amazing of my life and one I look back on fondly. It was also here that I met my wife, Erin. We were both counselors and grew close together over the years. When summer break would hit, I would fly back from AZ to work at the camp for the summer. Erin, was a few years younger than me and once she graduated college she moved out to AZ to be closer to me and work on her Masters in Social Work. We got married in 2006 on the beach in Fort Walton, FL. Erin is a social worker and one of the most compassionate people on the face of this earth. She's also a hard worker and very smart in her field. She's a director of training at that company she works for. The company provides services for youths who have development and behavioral issues and their families.

Erin and I talked over and over and decided early on that we didn't want children. We were both really focused on our careers and liked have the freedom to pursue our hobbies. I would also see classmates during my Masters and PhD programs and wonder how they could possibly do it while raising a family. But, during my dissertation portion (the last year of schooling), we both came to the realization that we wanted to start a family. We tried, Erin got pregnant, and then she had a miscarriage. This obviously devastated us both and it took us some time to recover. After about six months, we tried again and this time everything worked out well. Our daughter Kora was born on 12/26/13. We spent that Christmas first in the baby center with our doula and then the hospital when Kora decided she didn't want to come out and Erin was having trouble with delivery.

We are a dog family. Erin and I adopted our first dog together shortly after we moved in together. Sedi (Sadie) was our first and she was the best dog ever. Once we moved into our first house together, we adopted two more dogs, Sparky and Sunny. All were strays or abandoned (this was around the housing crash). Sedi lived until she was 10 and then was diagnosed with cancer. She deteriorated quickly and died in May 2013. It was crushing for us both.  Erin thinks that she knew Kora was on the way and wanted to free up space. But, in October 2013, Erin was at a work function and someone dropped a dog at the park and left. The dog was scared so I came and picked her up. We named her Sage and she's been with us every since. She has a lot of the same qualities that Sedi have so we joke that he spirit is inside of Sage.

A few years later, there was a chihuahua roaming the streets in our neighborhood. This was during the winter and the nights were really cold so I grabbed him off the streets until we could find the owner. Once I got him, I realized that he was dumped. He was old with lots of health issues. Kora named him Honey although he was a nasty little dog. He was scared and probably in pain. We kept him safe for about a year and a half before he passed away back in May 2019.

Sparky was Kora's dog. We were so worried about him because he had nipped at a few kids before Kora was born but he ended up being Kora's best friend. He slept in her room from the minute we brought her home from the hospital. First, he would lay under her crib and when she got her own bed he would jump up with her and sleep all night. Once he lost his hearing and couldn't jump any more, we would place him on her bed where he would stay until the next day. In July 2019, Erin was in NY with her family and I was in Philadelphia for work. My sister was watching our dogs. She called to say Sparky couldn't walk on one of his legs. He had cancer. She kept him comfy until we got home and then we had to say goodbye. Sparky's death crushed Kora for months. Every night she would cry herself to sleep. In December 2019, I came home from work and was surprised with a new puppy that was one of 40 that were abandoned on the reservation. Aryel (although a different breed) looked just like Sparky; all black with a white patch on his chest. Kora said Sparky's spirit was inside Aryel.

Sunny and Sage are both cattle dogs, Queensland Heelers. They aren't related but they are wonderful dogs. Sunny is the smartest dog we've ever had. They are both 11ish now so we know that tough times are ahead.

I started KB Kornhole Games in 2015 as a side hobby while teaching at ASU. I realized that I was really good at the details of planning events and was able to incorporate a lot of ideas that I had learned through my teaching experiences. In 2016, I was getting so busy with events that I decided to quit my teaching career and focusing on developing my business. So far, it's been pretty successful. I am also a national director with the American Cornhole League and our events are on ESPN. It's been pretty fun but a tremendous amount of work.